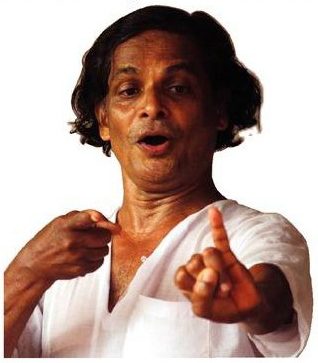 Outstanding and amazing–  these words I hope would express, at least partly,  the greatness of a Yakshagana Guru Bannaje Sanjva Suvarana, Bannanje is being felicitated in a full day function in Town hall Ajjarakadu, Udupi,

Today (14th of July 2018).  Comparable with the best of the Gurus, he more than deserves this.

I have known Sanjiva closely for nearly four decades . His role as a teacher, performer, Yakshagana tradition reviver and a friend of artists cannot be exaggerated enough. A totally dedicated man, always ready to serve the cause of art he has trained over a thousand  as regular students and many more in short course sand crash programs  He reaches out to anybody who wishes to learn the art. Besides he has helped researchers, visitors, and all those who have come into contact.

Even very senior professionals come to him for guidance on the nuances of  Yakshagana. Call him to a remote hilltop or a village to teach a single student – he is ready.!  I have not seen many who have taken a vow to spread, teach and inculcate Yakshagana  like him, going out of and always ready sacrifice comforts.

A real authority on Badaguthittu (Northern Style)  Yakshagana, Sanjiva is an ambassador of a great tradition in the true sense of the term.

Having achieved so much ,having toured inside India and over 50 countries , received many honors he  simply super simple and humble always smiling  to you and talking before you do.

It was moment in the history of Yakshagana pedagogy that the Manipal Academy Of General Education chose him and they are fully rewarded and proud about that.

Smt Vedavathi Sanjiva Suvarna, was a the force, poer and inspiration behind her husband’s great achievements for which she has contributed immensely.